People may love you but their life path is theirs and equally they need to stop judging your life choices based on their own path. Even other creatives like to weigh in too but their successful path is not your own, their timing not yours, their wants again theirs, not yours. Don’t ever stop dreaming because your dreams need YOU to be on their side to make them real and dont listen to any nay-sayers, ever.

I have just watched the fabulous documentary ‘Searching For Sugarman’, wept hard and then had to lay down a quick song as it just moved me so much. You are probably ahead of the game and seen the film already as it is after all an multi-award winning film and I had heard about it long before I actually took the time out to watch it.

Not only is the story of making it quite something with the director running out of money and finishing it with an iPhone vintage app but the transcendent story of Rodriguez, a musician whose fiery poet heart never stopped fighting reminded me again of the importance of our work as artists. I had a comment flung at me last week ‘I hope you enjoy your little auditions’ and it rankled. It sat like a burr in my side because there are no ‘little’ auditions, just as there are no ‘little’ songs, ‘little’ paintings, ‘little’ novels. All our creativity and our work is never ‘little’; people may judge it as such, they can choose to dismiss you and your work, they can not ‘get’ it but that does not mean your work does not count.

The impact that Rodriguez had through his music in South Africa, despite him having no knowledge of this just shows yet again how we and our art can impact in ways we will never know. The gift of creativity is bestowed, from the Gods, the muse in the wall, from our own souls and thus I have to say you need, we all need to say a full on firm F*** You to anyone who has does not get our dreams.

It may sound harsh, but I don’t care how much they care for you, how it is for your ‘own good’, yes you may have to take a reality check on the bills you need to pay to live , but that must not stop you developing your creative projects, having your songs heard or your art seen, even if you have to create at 5am before the kids get up. Art is that important, to you who makes it and to the viewer who may take beautiful comfort, inspiration and power from it, even if it only sells six copies, as I gather Rodriguez’s first album did in the States.

A lovely friend of mine Kerry has been posting today about getting a bad review in Edinburgh, reeling from the hatred that a stranger can bring to bear. Kerry and I studied jazz harmony and singing together many years ago, she has a fabulous voice, she first did an Edinburgh show because I invited her to perform at my late night cabaret show there and I questioned her as to why she had read the review in the first place, I thought she should know better 😉

@jumokefashola had re-posted this LA Times article on Twitter recently and I offer it to you in the hope that you will remember this when you are feeling down, alone, querying if following your dreams make any sense to anyone but the tiny kernel in your heart that screams ‘This we have to do”. That and watch ‘Searching For Sugarman’, you wont regret it.

“Artists are some of the most driven, courageous people on the face of the earth. They deal with more day-to-day rejection in one year than most people do in a lifetime. Every day, artists face the financial challenge of living a freelance lifestyle, the disrespect of people who think they should get real jobs, and their own fear that they’ll never work again.
Every day, they have to ignore the possibility that the vision they have dedicated their lives to is a pipe dream. With every role, they stretch themselves, emotionally and physically, risking criticism and judgment. With every passing year, many of them watch as the other people their age achieve the predictable milestones of normal life – the car, the family, the house, the nest egg. Why? Because artists are willing to give their entire lives to a moment – to that line, that laugh, that gesture, or that interpretation that will stir the audience’s soul.
Artists are beings who have tasted life’s nectar in that crystal moment when they poured out their creative spirit and touched another’s heart.
In that instant, they were as close to magic, God, and perfection as anyone could ever be. And in their own hearts, they know that to dedicate oneself to that moment is worth a thousand lifetimes.— Definition of an Artist by David Ackert, LA Times“

Podcast: Advice on criticism. Be strong and wrong

Post 48 of Dream, create and make money in the arts
This is a series of blogs for you on how to dream up, build, market and sell a creative event, gig, festival, book launch, cabaret night, exhibition of rude plastic cupcakes or whatever creatively inspires you. It is time to create and put on that play about your family, a series of drawings about hedgehogs, the album you have talked about making or the short film you always wanted to write and make. You can read the series in order Part One or just pick and choose a topic that interests you. 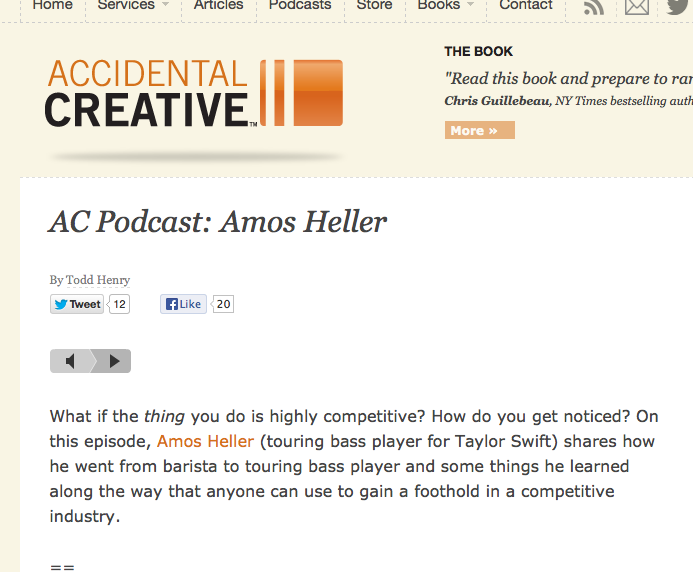 It is hard for creatives to focus down, we all have so many ideas and dreams - I write songs, music jokes, cabaret shows,... 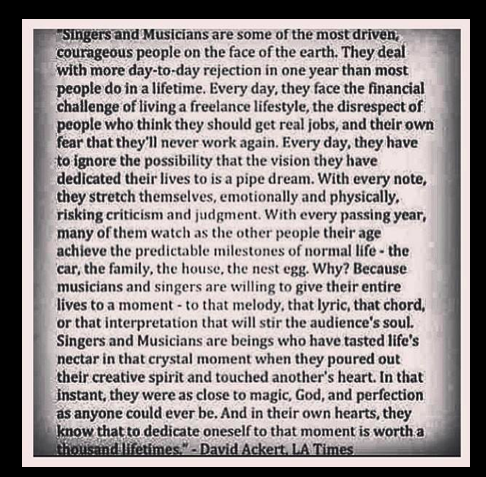