100 Days Of Being An Actress / Actors / Casting / Creative Dreaming / Directors / Exhibit your work / Filmmakers / Gratitude / Marketing / Series on Becoming a Successful Creative / May 14, 2014

Is there a networking place or community you can plug into for your own brand of art? Maybe a book publishers convention, major art exhibition, or indeed where I am heading now to a film festival as I sit on the plane tp Nice. Creatives I think need to be surrounded by others who don’t just talk about it but do it, that finish their projects and get them out there. It inspires you, gets you re-focused and also puts you in that network of people perceived as being serious about their work.

I was reading how Ken Loach current film being premiered at Cannes could be his last (my friend Martin Butterworth does all his film titles) but over the decades Ken Loach and his British compatriot in art Mike Leigh have made films their way and taken them round the festival rounds, hence putting them in the press and distribution pathways of the world. I was reading an article in yesterday’s Time Out magazine when Ken Loach said that the press likes to suggest rivalry between Mike and himself but actually they are just two filmmakers who often get sat next to each other as their surnames both begin with L! 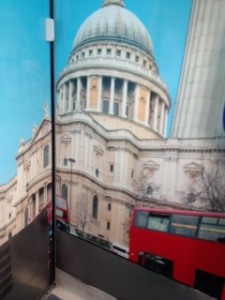 Day 9 100 days of being an actress: Cannes bound & surrounded by glamour

I am writing this sat on a plane filled with the most glamourous looking passengers I have seen in a long time. I am on the way to the Cannes Film festival and even in the cheap seats everyone has obviously been up since 5am blow drying their hair. Even the babies have got sunglasses on …

I also will admit to blow drying my hair at 7am and wearing sunglasses on the plane. This is largely due to my 3 hours sleep, I have chosen to cheat by going to the Mac makeup counter at Gatwick and bought some concealers & brushes which necessitated the lady actually doing the concealer makeup magic I needed. I have to say Vicky was very friendly and helpful and restored my faith in Mac makeup artists.

I use a lot of Mac and I have been going to their Foubert street store in London since it opened, however the last few times I have been in the last four months, always to buy never just to browse, the makeup artists have been grumpy, unhappy & honestly not helpful. Asking one regarding differences in foundations last month I could only hope she had been dumped by her boyfriend the night before as it was the only excuse for her to be that miserable and honestly useless.

Back to the point in hand why am I going to Cannes? I thought I would wait to next go when I had a film in but that nearly but then didn’t quite happen. However a place to crash came up, flights were inexpensive and I thought why not. It is always good to be surrounded by 1000s of people all in your industry. Sure the headlines will be about the A listers but there are many producers and directors here all with projects. Being here as an actress means I am connecting with the working film industry, not people who talk about it, but people who dream up and make their art, their shorts, documentaries & indeed features. I bumped into a producer I know at the boarding gate, my Facebook status asking who else is going to Cannes has led to me knowing a few friends and work colleagues who are also dropping in.

An old friend has even out of the blue offered to pick me up at the airport as he lives here now 🙂 (yes I am super grateful!) When I last came to the Cannes Film Festival years ago it was always to party and then pop over to Monaco to the Grand Prix (yes I appreciate I have had an amazing life so far). This time though I could have chosen to come the second week and pop to Monaco for the weekend but I chose instead to come for the first week so I can focus on seeing the films, having interesting conversations, saying not just to the world but ultimately to myself that film is where I see my future and being here is an affirmation of that. I am serious about my chosen art form and the business of that. I am not planning to photobomb anyone or indeed do any stalking. 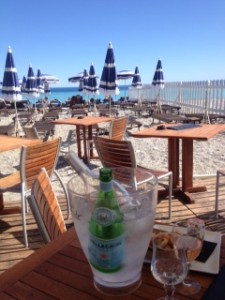 Nice beach on my arrival

Due to my last minute decision I have not yet applied for my Cannes accreditation, I will go in tomorrow and point them to my IMDB page. If it doesn’t happen equally I will still find a way in to see some short films, I am refusing to stress about this. (Additional Note: Yes I did get my accreditiation)

Equally I am choosing not to chase the party invites though no doubt some will fall my way, I am here to see films, get my mind blown (artistically rather than any other way ;-)) and enjoy all the moments.

Are there local or international networks of creative people in your field you can find and join up? I was on a shoot on Monday, due to knowing the producer so I was called in last minute as someone fell ill and the executive producer said on hearing I was off to Cannes

‘Well networking is everything’

People need to know what you do, no matter how brilliant you are, if they haven’t seen your great acting, painting, cinematography or writing how can they help or indeed hire you? So get out there and get involved in your community in a positive, supportive non creepy or over egotistical way!! 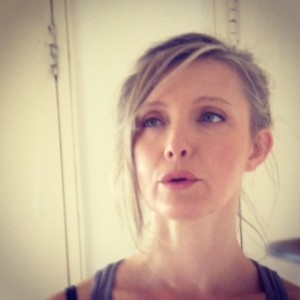 How organised are you with your invoices and expenses? Yes I know this is called 'love your creativity' & a 'one hundred... 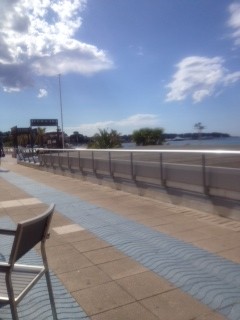