Could you get together with some fellow creatives and make a collaborative project? Maybe you could write and put on a showcase, make a film together, have a new work reading night or simply all turn up with a few paintings each, hang them on a cafe wall and supply some Aldi cheap champagne and call it an ‘Opening’. Divide the tasks of marketing, press, social media, websites and production between you and off you go. Such projects can only help build your community of artists, make you feel positive about your art plus it always seems to have the upside benefit of changing the energy around you as new work comes in, you have made a name as an organised and productive creative rather than one who sits in a small attic and moans noone wants to book them!

I recently joined Actors Rechoired, the official Actors Centre choir, largely as they are a lovely bunch of actors and we rehearse on Friday nights.I don’t regularly have solo singing gigs any more as I am too busy acting and my harmony work at the Royal Festival Hall tends to be every couple of months at best so I like to keep my ears in tune and sing regularly with others. (You have to be an Actors Centre member but we are always looking for new members especially men!)

We have a concert this Sunday 8th June 2014 at the Tristan Bates Theatre at 2pm (see flyer!) called Perfect Pitch, I made the flyer and I am also producing the show as well, ably assisted by some of the other actors in the group. I think they are doing more work than I am actually 😉

So a few of us, 7 or 8 I believe are singing a couple of tunes tomorrow Sat morning to promote the show on BBC London 94.9.It is the morning breakfast show with Jo Good and Simon Lederman, we are due on about 09.10 am link to show here I like singing on the radio, I like its reach and I love the fact that we have to get it right as it is live. I sing soprano one as I can (after years, possibly decades of practice now!) can easily blend in and have great volume control even at top C’s and above.

I sang twice live on BBC Radio 3 in March 2014, once with the BBC String Orchestra, the newly refurbished Organ and the other Voicelab vocalists as we premiered Neil Hannon (from The Divine Comedy) new commissioned piece ‘To Our Fathers In Distress at the Royal Festival Hall which was an incredible experience as the piece was beautiful.

BBC Maida Vale Studio One, rehearsing Neil Hannon’s To Our Fathers In Distress with the BBC String Orchestra

I also sang in a smaller group live on BBC Radio 3’s The Choir programme actually in the Radio 3 temporary installation studio at the Southbank cafe. Singing the first two movements of Durufle’s Requiem, not only live to thousands of listeners but also the startled Southbank visitors as our voices soared off in Latin. It is harmony work but I sing soprano and a lady afterwards came up to tell me how beautiful my voice was. Perhaps she had been standing a little too close as I am generally very good at blending. Still it was lovely to get some feedback as normally we dont get that kind of interaction with the audience at the Royal Festival Hall shows, I love singing in the space but there is something wonderful about being a few feet away from your audience. That was a preamble to the Royal Festival Hall closing ‘Chorus’ show conducted by the fantastic Andrea Brown.

I first worked with Andrea as I learnt and sang the initially hated but then much loved Michael Tippett’s A Child Of Our Time, one of those works that you realise when you first start to learn it that if it sounds like it is the right note you are probably singing the wrong one. For the actual concert at the RFH they also brought in some BBC Singers to plump up the numbers of the oratorio that we were doing. The BBC Singers put my sightreading to shame, their are goddesses of sight reading but they were also a bit thrown by exactly how difficult it was to sight read with all the contrasting harmonies and time changes from hell. I had my eyes firmly fixed on the conducter Andrea, they had their eyes on the music and there were moments when their timings was fractionally out just because of the complexity of the piece. To try and sight read that work live in concert though takes huge amounts of skill.

Details of our show and to book click here 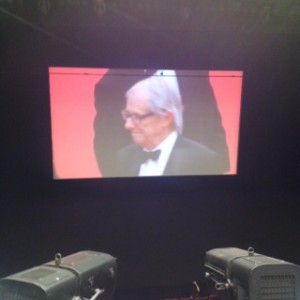 I wonder what tales you could tell through music, film or your chosen art form. We have all had mighty battles in our lives,...