I have been working with some actors and one said  ‘I am not into social media, I don’t do it’ and I spent the next twenty minutes arguing social media’s importance in establishing yourself as your brand as a creative. Whether you are an actor, musician, writer, painter or filmmaker I can’t see how putting a small amount of time each day or week to update the world on your work and progress, can be at all damaging to you.

Yes, people get obsessed and can waste their lives on Facebook as opposed to using their valuable time to make the art they want, true you can get over-dramatic as you see your ex partner doing ‘cooler’ stuff than you (particularly if you stalk them via their Facebook page) but a disciplined amount of scheduled time fully focused on building your ‘brand’ is vital.

When you send off a CV or an enquiry re a show or an exhibition including a link to your updated website, Facebook and Twitter they can see what else you have been up to. You can direct them where to look if they want more information. That way they may be pleasantly surprised to find you worked with an old friend of theirs, or on a project they loved. They can see you are an actual working creative, focused on moving their career forward in the myriad ways you chose to. Plus they may see elements in your work that they did not know they wanted but now intrigues them. 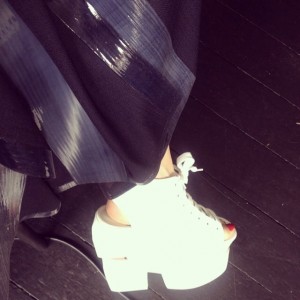 I am on set today for a music video wearing what can only be described as extreme fashionista wardrobe. It's from the catwalk...