When was the last time you got the thrill of making and following through on one of your projects? Whether it is writing a story and reading it to friends, or making, editing and showing your short film at a screening, turning creative thoughts into actual things is always a roller coaster ride of hope, exhilaration, panic, fear, self loathing and wonder through the entire process, heightened the night before and then the actual showing brings new kinds of crazy. And that’s before you read the reviews.(My advice DON’T ever read reviews unless you are the only producer and you have to! – Sir Derek Jacobi’s answer to me on reading reviews)

I have in the last seven days made my very first YouTube sketch video for my character ‘The Singing Psychic’ as well as also premiering the full length show of The Singing Psychic at the Tristan Bates Theatre right in London’s West End last night. My emotions have been racing at full tilt in every direction, I’ve had moments of knowing that this is the worse show idea in existence and then mid chanting had the thought,

Actually it could be incredible.

As I created the idea for the Youtube sketch – largely to promote my show, I worried I was about to ruin my entire dramatic acting career, that my foray back into stand up complete with a blonde Foxy Brown look including a very large Afro wig could turn casting directors off for life. I knew I had to make it and upload before the show happened, it is the only reason I ended up having the confidence to post it! I have even just seen a post I wrote last summer musing on my ability to pull this show and character off called ‘If Only We Could Know: creating from a place of never knowing if your project will work! Very prescient! 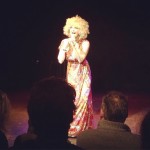 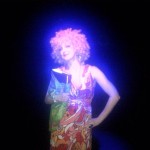 The Singing Psychic on stage Tristan Bates Theatre with her grimoire 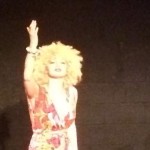 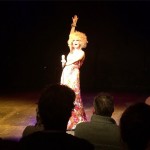 But was it worth the mainly self induced drama? Yes a thousand fold. My little YouTube sketch had 150 views in the first 24 hours, not huge but incredible considering I have no YouTube subscribers! (If you want to watch it and possible like, comment or subscribe that would be wonderful 😉

However we are now in the high 200’s of views and people chose to come to see my show because of it. As people watched and shared my little three and a half minute video I have had feedback that I would never have imagined, two friends said she (my The Singing Psychic character) was like a 70s Marlene Dietrich, something that was echoed by other friends who came to see the show. The terror, the fear, the hassle with compression and what the hell is annotation anyway? (it is the clickable links you put inside YouTube videos to direct your viewers to subscribe or go to another website etc), all of this was just part of the process.

As for my The Singing Psychic show itself, well I had the idea four years ago, used it as a few half baked sketches but it was only when last year I decided to book myself on a ‘Create Your Own Solo Theatre Show’ at The Actor’s Centre that it really started moving forward. I have created and toured my own solo shows before, from Edinburgh, Brighton and even Montreal Fringe Festivals but I know my procrastination style, I am always last minute.com, and in booking a course it meant I had to write. I have written a lot on this blog about the vital importance of deadlines and working with the solo theatre director Colin Watkeys on this course and subsequently meant I had to produce something every week.

However the jump from doing four short performances as The Singing Psychic in 2014 and of course the One To One Performances where I would do Singing Psychic readings for couples and individuals, into yesterday’s full blown 55 minute show which had a spine, depth and a journey within was huge. I had to write a massive amount of new material, saw Colin Watkeys just four times over the last month so I had a sounding board and his sage wisdom in seeing what I was creating and then to try the entire show in one lot in front of a crowded audience at the Tristan Bates Theatre, not having a clue if it was as funny, thought provoking and interesting as I wanted it to be … well I did not sleep well the night before!

The fact that the show went down stormingly well with my audience was of course a joy. 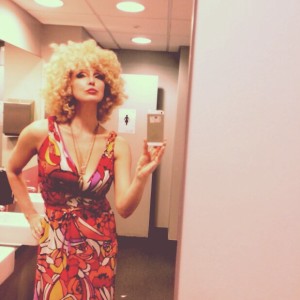 They laughed so much that when my character went into a dark place, somewhere I thought the audience would choose to follow, they refused, they just laughed harder. It was magical, as a performer I know that you can have terrible performances and wonderful ones with the same material but what I do know is that this character has legs, as in she is so worth developing further. I had so many comments about taking her to Edinburgh, into big theatres, that it should be a West End show… All of that rests in the Gods.. or at least in the work I now choose to do on the character, keeping her alive on stage and also on YouTube, but it does point out my four years of having this idea, of never fully committing to pushing her forward, could be perceived as wasting time. I don’t do guilt and in the four year space of non action I have become a much better actress but certainly The Singing Psychic could be further on her road by now. I actually did record four short sketches of this character three months ago and they are still languishing on my hard drive.

Fear stopped me, in pushing through that, that is where the joy is. We have to learn to ‘dance with the fear’, as Seth Godin says in his wonderful book ‘The Icarus Deception’ because the fear will never go away.

Even this full show that has just sparkled on a stage would not have happened if not for The Actors Centre asking their members, myself being one, about if any members (all professional actors) had a solo show they were prepared to pitch to the Commissioning Editors as part of their FIRST 2015 Festival of Solo Theatre performers. Back in October a punted February show seemed a comfortable distance enough to say yes to, and incredibly they agreed to subsidise me putting the show on in their fantastic West End theatre space, the Tristan Bates, partly funded by the Arts Council.

I needed all those helping hands, but without myself putting energy and odd moments of self belief, my project would still be just an idea I once had, rather than a show that people are today putting the most incredible photos up on Facebook and Twitter.

So it always comes down to you. The moment you acknowledge you are going to have to fight with yourself, overcome more inner resistance and negative inner voices than the world can throw at you, keep moving one small step every day, then you recognise that the rollercoaster ride is actually the very thing us creatives love to do! When we are not in the throes of creating and the crazy emotions that come with that, then we are normally to be found creating crazy in our personal lives.  So how about this weekend you sit down and really think about the very next step ou can take right now, to advance your current ‘golden’ project. Don’t sit in the pub with your friends and talk about it, actually sit down with a coffee or herbal tea on your own, Decide and Do post

Let me know what you did!. 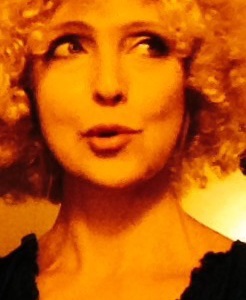 I don't do guilt. So I am asking this question in the gentlest tone you can imagine: how do you feel in the second month... 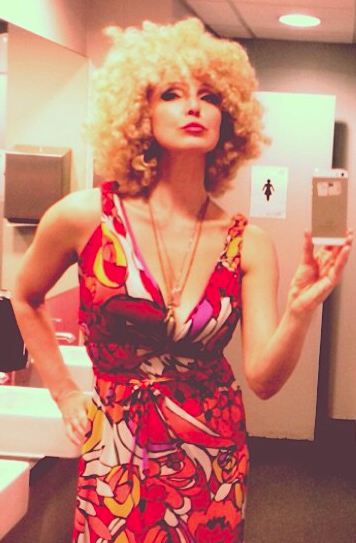