Georgina Sowerby on acting, devising & being an inspirational theatre maker

Georgina Sowerby is a successful actress, having worked at the National, the Royal Court as well as on various TV and film projects and is the co-founder of Dirty Market Theatre.
Podcast interview with some highlights below.

She is not a trained producer, she learns as the piece demands. However production is very much part of making your own work.
She talks about the devising process of Dirty Market Theatre.
Make a mini performance to show your ideas, making little tableaus and things have strange connections.
One of the questions was ‘What is your favourite fairy tale for now’ and out of that they have devised a fairy tale for adults. Fairy tales are gory, dark and looking at the older fairy tales is very different from the saccharine of todays childrens’ programmes.

We talk about devising, establishing the through line of the narrative, how an audience and critics likes to have a central message. In contemporary art we do not expect a narrative but in theatre the audience is very educated.

Oxbow Lakes is immersive in that the audience is promenaded and also involved emotionally in the characters, using three different spaces within the previously unused for theatre site.
We mention PunchDrunk and YouMeBumBum Train.

Georgina and her business and life partner Jon Lee are co-directors in Dirty Market Theatre and we discuss how you work out the schedule of family and creating art.

The joy of making your own stuff is because you get creative control and as an actor sometimes you are not meant to have creative ideas. Anyone in the space be it set designer, lighting or actor, all their views are valid.

Dirty Market call themselves ‘theatre bricoleur’, French for DIY, so using music, art, philosophy and you tinker with it rather than having a grand scheme.
Picasso says )paraphrased) ‘You have a concept for a painting, but the moment the pink paint hits the canvas, the painting speaks to you” So a framework is good but you need to be able to move within it.
Robert Altman ‘Pick any 5 great moments in my films and they all will be mistakes’

We talk on how mistakes work, and how a player is missing ‘the audience’ before you start the show. The live aspect.

I have learnt in both Jon and Georgina’s classes about Bacchus, the muse.
We talked about moving from being a successful actress to devising. Georgina went to Drama Centre but then assisted James Neale-Kennely
She loves the empowerment of emplying the resources in the room, and being inspired by group work. She has been very inspired by Anne Bogart’s work and being delighted with what people to bring.

How has she kept the fire going within art and theatre?
Georgina replied ‘Being really stubborn and having the realisation that she is not constitutionally able to wait for someone to allow her to be creative. Her background is when you want to go and paint you just do so, not wait for someone to tell you. She loves making opportunities for herself and others.

She has the wonderful analogy of a chick pushing through the egg and how it needs aggression to live. Her determination is about having a choice about your life. This is why she loves teaching adults and opening their lives and hearts.
I talk about the Meissner high when adults finally feel free to express
She loves being an actor but hates the business of being an actor with sending CV’s out,

Shirley Henderson ‘Eventually you have to decide what makes you happy’ and Georgina has found another way of doing it, by
A designer, Sutra Gilmour ‘Don’t try to be original, be personal”

For tickets and more information: www.dirtymarket.co.uk 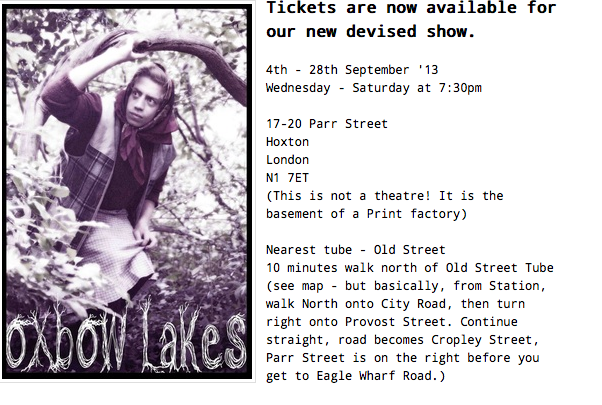 Post 55 of Dream, create and make money in the arts
This is a series of blogs for you on how to dream up, build, market and sell a creative event, gig, festival, book launch, cabaret night, exhibition of rude plastic cupcakes or whatever creatively inspires you. It is time to create and put on that play about your family, a series of drawings about hedgehogs, the album you have talked about making or the short film you always wanted to write and make. You can read the series in order Part One or just pick and choose a topic that interests you.

How to deal with ‘free’ work, learning to say NO & taking care of yourself”