This section is about my album, cabaret shows, my singing, song writing, stand up, compering of shows and various experiments with some of the most dangerous instruments on the planet. My acting and voiceover work is on a separate website.
‘She certainly knows how to entertain’ **** Three weeks, Edinburgh Festival

‘Noone sings those …(cabaret) songs like you do” Jeff Beck

Above is my live jazz album ‘If You Can’t Make Love, Love Coffee‘, I recorded it with ten great musicians that I hand picked and we recorded it all together live on the old Abbey Road mobile studio desk. I wrote or co-wrote all the tunes and loved making it. I no longer tour with a live band singing my eclectically mixed set but I am sure sooner or later it will happen again 😉 The great title was given to me by the amazing Jerry Leiber of Leiber and Stoller fame, he actually wrote the words to ‘Stand By Me’ and ‘Jailhouse Rock’ amongst many other tunes. I mixed the album in the Sunset Marquis studios in Los Angeles and Jed Leiber, a Grammy award winning producer in his own right, owns the studio, hence the link to Jerry his now sadly deceased father.
You can listen to and buy all the tunes above if you want, just hit the View Track List button below. Feel free to share the tracks on Facebook and with your friends. Love to hear any feedback.
Cabaret/jazz singing

Some mp3 clips from myself and my guitarist Steve live in a studio in 2013 – no editing, just a guitar, voice and odd bit of accordion playing)
Dear God
Pull Up to the bumper

I  write and perform my own shows which include comedy, characters and song which have toured and done various festivals from Edinburgh, Montreal, Brighton, Europride plus lots of gigs from London, LA to Birmingham (let’s leave the most glamorous to last). I have also devised, compered and sang at sell out cabaret nights and had lots of brilliant guests.  I guess the podcast is currently the non musical version of that – but that is changing soon, be warned 😉
I also have worked with other creatives in devising shows and putting them on,  musically directing shows and even some comedy choreography. 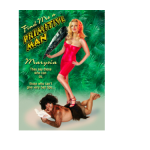 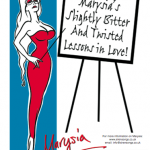 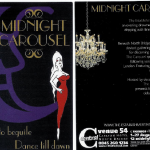 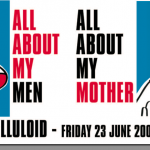 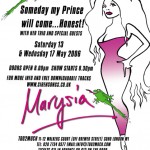 I  sing pretty much when anyone lets me or pays me 😉 from solo jazz/cabaret shows with my own band to regularly singing at the Royal Festival Hall as a high soprano in the established harmony group there singing in, at last count, eighteen different languages. I found Scottish the hardest , Swahili was relatively easy as I didn’t expect to understand it. I had to get a full translation of Robert Burns Ca Da Yowes (it means ‘Call the Ewes”)
Ca Da Yowes
RFH Choir slovak & bartok medley 1
Going home – Dvorak Going home – Dvorak us singing ahead of a show at Purcell Rooms
Pic below is of May Bank Holiday 2013 as a megaphonista! 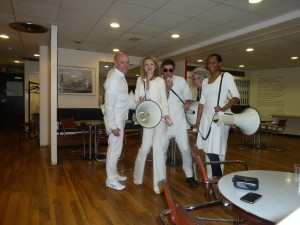 I also have written and done some dance tracks, I am releasing one soon 😉
My forthcoming dance single ‘Londontown’

This is a remix of a track I wrote years ago and Andrew Hyde, an old friend, suggested we remix it. Planning to release Summer 2014.

You will have heard a clip of it on the Podcast as I am using Londontown as my show music.

I did stand up comedy for years in all kinds of venues from massive few thousand audience to four people in the room and then two of them left at the interval. I am currently developing my next character and shows (plural 😉
Also I like to write and record bonkers sketch ideas eg
Press Nights in Shakespeare’s time sketch byMarysia
I write both music and song lyrics, from straight songs, dance tunes to comedy versions. I have become fabulous at harmonies but that is only after a lot of singing, practice, gigging and ear training.
I wrote a jazz album and then hustled ten brilliant jazz players in a room and made them play it. The result  was ‘If You Can’t Make Love, Make Coffee’, the title was given to me by Jerry Leiber (of Leiber and Stoller fame). I even produced a coffee mug for sale 😉
Live track “Vampire for your love’ off my album

I also like creating branded products, there was the Cooking and Cabaret teatowel and the Marysia ‘If You Can’t Make Love, Make Coffee’ mug 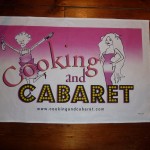 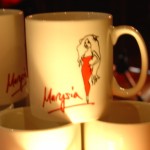 If you would like to buy, here’s the link to buy album or mug. I do have a few teatowels left but have yet to pop them up for sale 😉

I play lots of different musical instruments – some far better than others, my main instruments are voice and jazz bass (electric).  I am trained jazz musician, though I do question that when I sometimes try and play an obscure scale that I can’t quite remember and havent practised properly. I have played on stage the accordion, the musical saw, electric and double bass, the guitar, lots of percussion instruments, an odd bit of piano.  The ukelele I bought on a Saturday morning, worked out the strings and 3 chords in the afternoon, wrote a quick song and performed it to 300 people in the evening, all of whom actually chose to sing along with me.
Basically I should try to master these new instruments but  if a show or song needs something new I will go and work out the instrument to get what I need. This approach has always worked til I tried the musical saw.. a  woman afraid of power tools bending a 36″ toothed saw between her knees with her bare hands whilst trying not to poke herself in the eye with the bow…. lets just say it is an experience best forgotten. Yes I was the idiot who decided that in the fabulous Vernon Thompson’s production of A Christmas Carol that the Ghost Of Christmas Past needed to play the thing ( I was playing said Ghost, other characters and I was Musically Directing the show).. all I can say is the show was sold out but it was not due to the dubious squeaks I managed to get from the saw nor the gasps of horror from fellow actors every time I got the metal horror out.

What made the entire learning process worse was that I had broken my  finger joint shortly before rehearsals and starting to learn said impossible instrument with having my right hand bandaged didn’t help.. but if I say I am going to do something (and people let me!) I will deliver. This has been both my saving and fall from grace (read my old Edinburgh reviews for proof of that 😉 – No I am NOT attaching them ;-) Maybe the most dangerous instrument of all in my hands. the megaphone 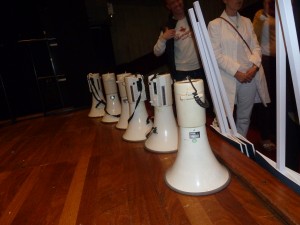 I also have written  2 novels (currently hidden in my drawer), the odd article,  a guide to dating, none of which I  have had the ichinen to see if I can get published.
Ichinen is a Japanese phrase that is used in Buddhism a lot. In very simple terms it means the life force, energy, courage, wisdom, life state with which I approach my life and my goals. Hence to not have ichinen is a slang for ‘I havent got around to it, I haven’t yet started fighting and overcoming  the obstacles which I need to win over this challenge and win in this situation.
The point of my digression is that I haven’t had the courage, will power or energy to push my novels further that will change, it’s on my list!